The cucamelons have continued to grow away as quickly as they started, and were moved outside last week to harden them off before planting out. We’ve never grown these before, so we’re not sure what we’re doing, but a quick Google search gave us some ideas.

They grow like a vine, so we fixed some plastic coated metal fencing up for them to climb up. You can see the little tendrils they already have growing which will help them to climb their way up. In fact, they were already a bit difficult to untangle from one another in the seed tray, so we don’t think they’ll have any trouble climbing up the fencing.

We didn’t have much space left, so we had to plant four cucamelons in a 30 litre pot, with a small cane to support their journey up to the main fencing. Let’s see if they carry on growing at the same pace they have been!

One of the cucumbers we took from a cutting a couple of weeks ago was also ready to plant out. Similarly, it was planted out in a 30 litre pot, making sure not to put too much damp compost around the stem of the cucumber, as they can be a bit temperamental and we wanted to give it the best chance of not rotting off. 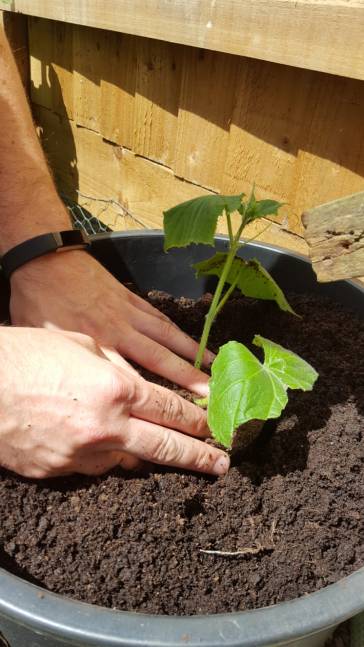 Like with the cucamelons, we have used a bamboo stick to support the plant until it reaches the batten that we’ve fixed to the fence for it to be trained along.

We’ll keep a close eye on the plant, as they can be difficult to get going, making sure not to water too heavily, and certainly not near the base of the stem.