There are a few things that you haven’t heard about for a while, so we thought we’d give you an update on these.

After a number of weeks where the plants didn’t seem to make much progress at all, they seem to have got established now and have shot up all of a sudden. They are now almost as tall as me and are starting to produce cobs. It will probably still be a few weeks until they’re ready, but hopefully it’ll be worth the wait!

The garlic were less of a success. We always knew we might be up against it a bit as we’d planted the cloves in Spring, whereas they are usually planted in the Autumn and then overwintered. However, several growers have had success with Spring planted garlic so we thought we’d try our hand at it too.

We think a combination of late planting, a warm spring and perhaps the compost we had them growing in led to the early dying back of the garlic. As you can see, the cloves we planted have transformed into new garlic bulbs, but they didn’t get a chance to fully form so that each one was made up of a number of cloves of its own. Instead, they are just a single, round “clove”.

Turns out they still taste just like garlic though, so we’ve been enjoying them in lots of dinners! 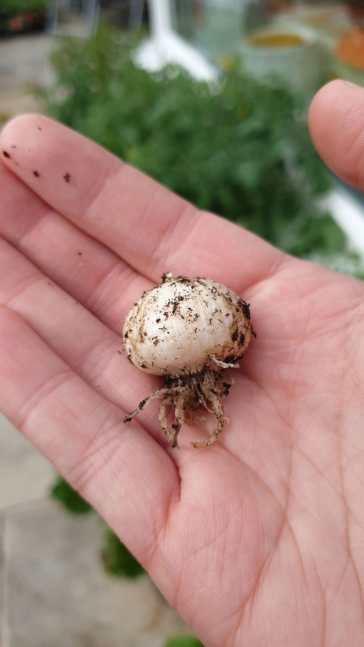 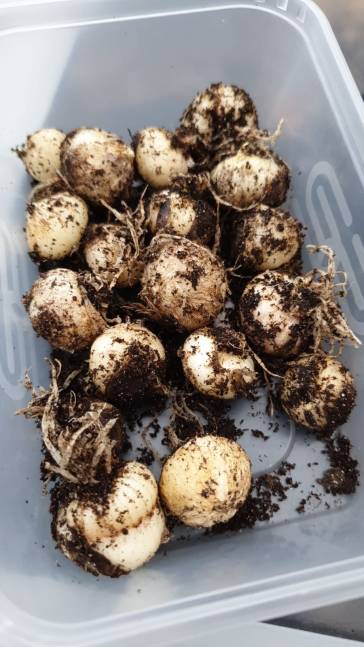 The various varieties of lettuce seemed to do quite well in their pot and have all been eaten now.

Perhaps they would’ve done slightly better if they’d had a bit more space, but it just goes to show what you can grow even where space is at a premium!

Lettuce are another funny one when it comes to watering. They’re generally fine to begin with, but once they start hearting up, we try to only water around the base and not over the top of their leaves. Otherwise the water can get trapped between the leaves and then when it gets warm can cause the lettuce to rot.

The strawberries were a bit like the garlic – we came to the party a bit late. We decided that last year’s plants needed a refresh as they’d lost a bit of rigour over the years, but didn’t get round to ordering some new plants until quite late in the day.

Therefore, the plants haven’t had much of a chance to get themselves established, let alone produce a load of strawberries for us! They’ve done their best though, as we’ve had a few strawberries from them.

We have also had second thoughts about the weed suppressant. We thought it would be a great way to stop weeds and give the strawberries something to ripen on instead of straw which we’ve used in previous years. However, we’ve decided it also stops water getting to the plants and therefore has probably hindered their growth. Straw it is next year!