Our early sowing of courgettes that we are growing in containers have been growing on along the pathway of the polytunnel to try and get them to crop a bit earlier. After a couple of weeks of slow growth (which always seems to be the same with courgettes!) they’ve started growing more steadily over the last week or so and are starting to expand over the sides of their containers. 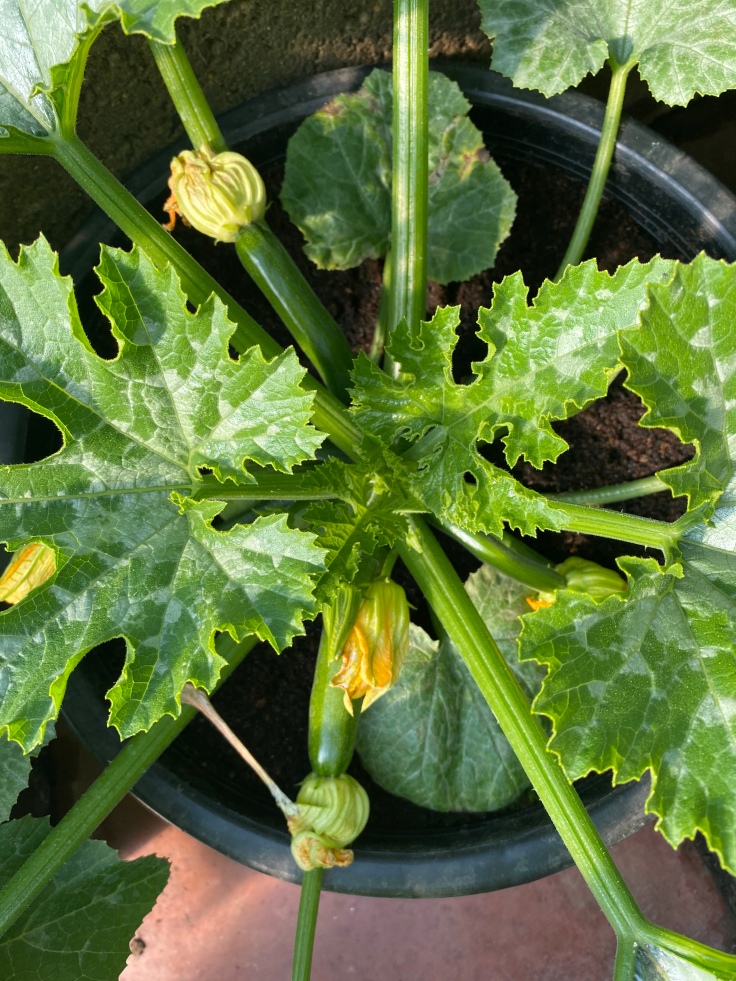 And we have finally tasted our first courgettes of the season! They weren’t very big (especially when you have to share!) but they were very tasty all the same. We usually take the first few courgettes off our plants when they are slightly immature like these, as we find it helps the plant to establish itself quicker, and ultimately provide us with more courgettes in the long run. Otherwise, we wouldn’t usually harvest vegetables until they are good and ready 🙂

Because the plants are growing over the side of their containers in the polytunnel, they’ve had to move, as Dad is starting to not be able to tend the other plants he’s got growing in there! So now the cold spell of weather is (hopefully!) over, we have moved them outside. Naturally, I have picked out the sunniest spot in the garden for them. The same place we have successfully grown courgettes in containers for a couple of years now. 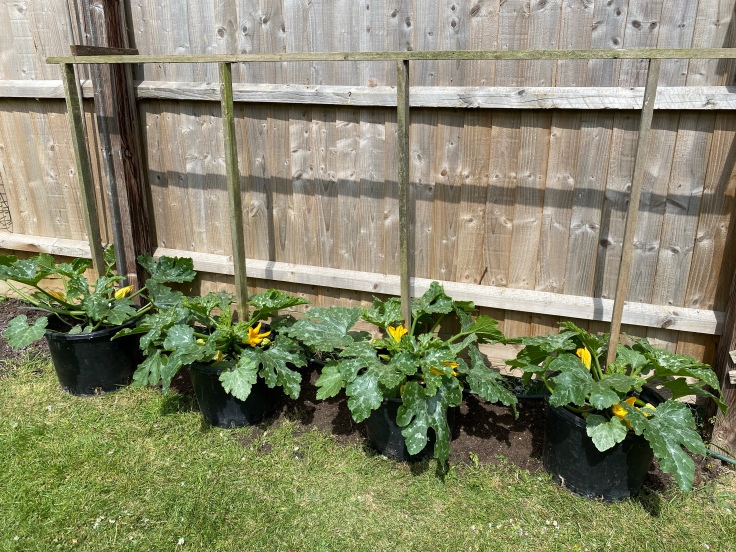 As we have done before with our container courgettes, we’re going to try and grow them vertically so they don’t take up as much space in the garden. Midnight is a perfect variety for this, as it is bred especially for containers as its plant is more compact without losing its ability to be heavy cropping, and most importantly, delicious!

For the courgettes to grow vertically, they need some support though. As the plants can get quite heavy, especially when laden with courgettes, we always use a stake/batten rather than a bamboo cane. A piece of 1 x 1.5 inch or 1 x 2 inch batten is what we usually use, but anything similarly sturdy would do we’re sure!

We push the batten into the compost a couple of inches away from the stem of the courgette, pushing it down as far into the container as we can.

We then made a bit of a frame up to make sure the vertical stakes were sturdy. You could do this whatever way you like, providing the stakes you were using are not going to succumb to the wind (or just gravity!) as the plant grows and becomes heavier.

Once we’d pushed each vertical stake in against the courgette plants so that they were all at the same height, we screwed another batten across the top as shown.

Then, we added a supporting brace on either side, by screwing another batten down onto the horizontal stake and then putting a couple of screws in the other end of this to attach to the fence post.

They look happy enough now anyway, but fingers crossed for no more cold weather, as not sure they’ll be too impressed with that!