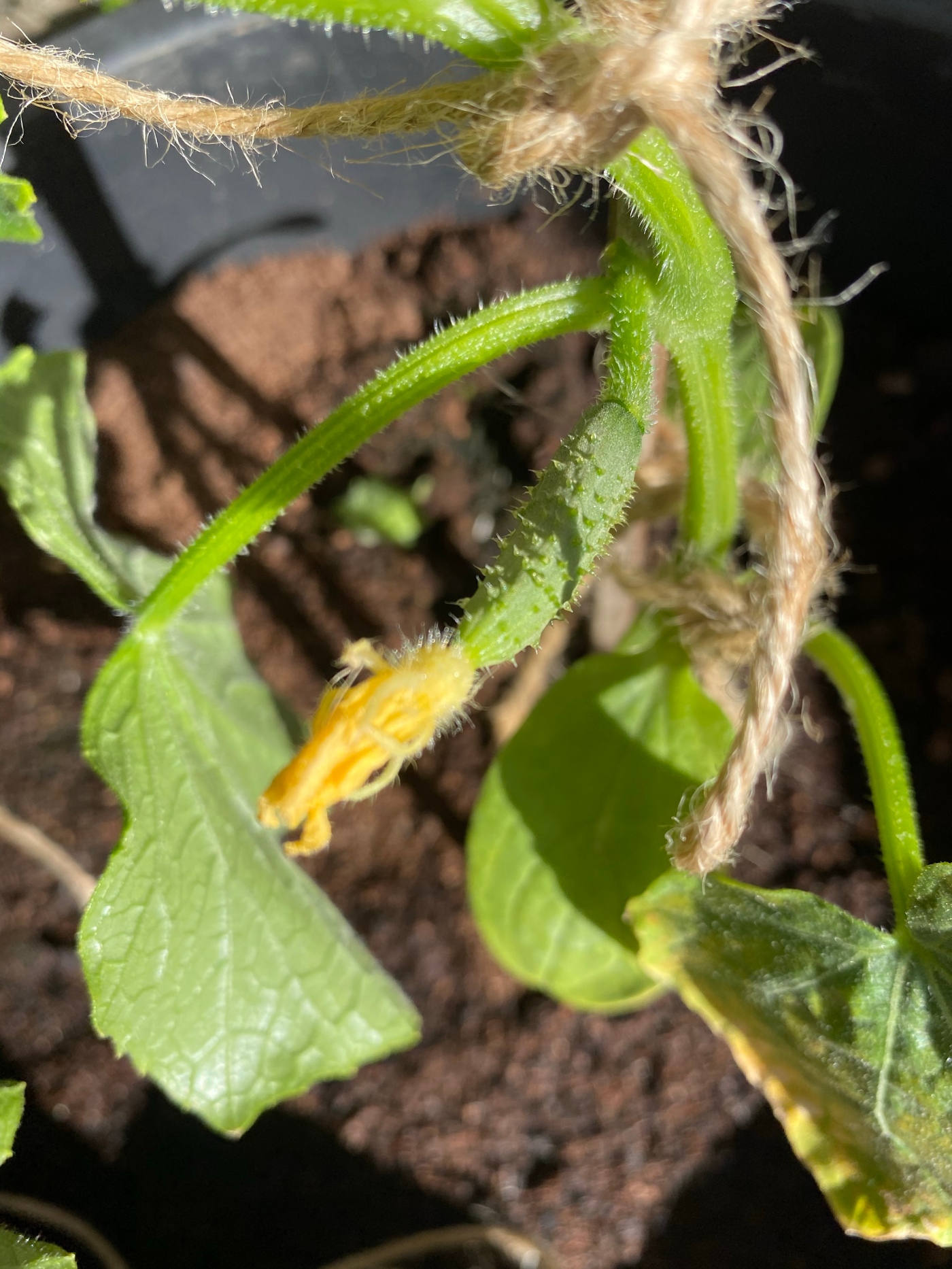 After a few weeks in their final destinations, our outdoor cucumbers needed a bit of tending to at the weekend. This is one of the Marketmore cucumbers which has almost reached the top of its cane and onto its wire mesh.

We tied it in a couple of place along its stem to support it up the cane and you can see that the cucumbers are starting to form.

As well as the Marketmore, the Diva mini cucumber and Tasty King outdoor cucumber are coming along nicely.

The first thing we did was pinch out any side shoots. Like with the tomatoes, these are where there are leaves that grow out of the side of the stem, which if left would grow their own mini plant. However, we are mainly after the cucumbers themselves, and we can grow enough on a single main stem, so we pinch off all the side shoots as you can see in the before and after photos above.

Next up are the male flowers! Although lots of cucumber varieties these days are “female only”, so of the older varieties, and more often the outdoor varieties still grow both male and female flowers. Unlike courgettes and marrows which need both in order to pollinate, cucumbers female flowers self-pollinate. And in fact, if they are pollinated with pollen from a male flower, the cucumber is likely to taste bitter! Therefore, this one here got pinched off along with the side shoots.

As a reminder, the female flowers are the ones that have tiny cucumbers growing from them, and the male flowers just have a stalk.

Finally, we dealt with the tendrils (you can see one in the photo below). Although when the cucumbers reach the wire mesh, we will probably leave these in tact so they can naturally cling on to the wire and make their own way, whilst they are growing up a cane and we are tying them, the tendrils aren’t needed an are just taking unnecessary food and water from the cucumbers!

Finally, we tied the cucumbers up. As with the tomatoes, we do this by tying the garden twine first round the cane tightly, and then loosely round the stem of the cucumber. As we’ve said before, we don’t want to strangle the plant as it grows on.

We’re still protecting the cucumbers from the sun using fleece and will keep doing so until they get too big to do it with!