It’s that time of year where everything is growing really fast. Despite commenting in our previous blog posts about how slowwww peppers are to grow (which I still stand by overall!), they have really got a wiggle on the past couple of weeks and were ready to pot on.

Although it’s often tempting, you should try not to pot plants up from one pot into a much larger pot hoping to eliminate the need to pot up to the other various sizes in between. Or at least not until a plant is properly established. Otherwise, you run the risk of the plant’s roots going slightly wild in all the fresh new compost you’ve given them to run riot in, and make loads of root and no plant!

Therefore, these peppers are being potted up from a 3″ square pot to a 5″ square pot. It should give their roots enough space to expand and support the plant as it grows, but also leaves the plant enough energy after slight root expansion to grow us a nice strong, healthy pepper plant, and ultimately peppers!

First things first, each pot was filled about a third of the way up with some multipurpose compost. When you’re potting up like this, what you’re after is to fill the pot so that if you sat the current pot on top of this compost base, it would be just below the new pot’s surface. 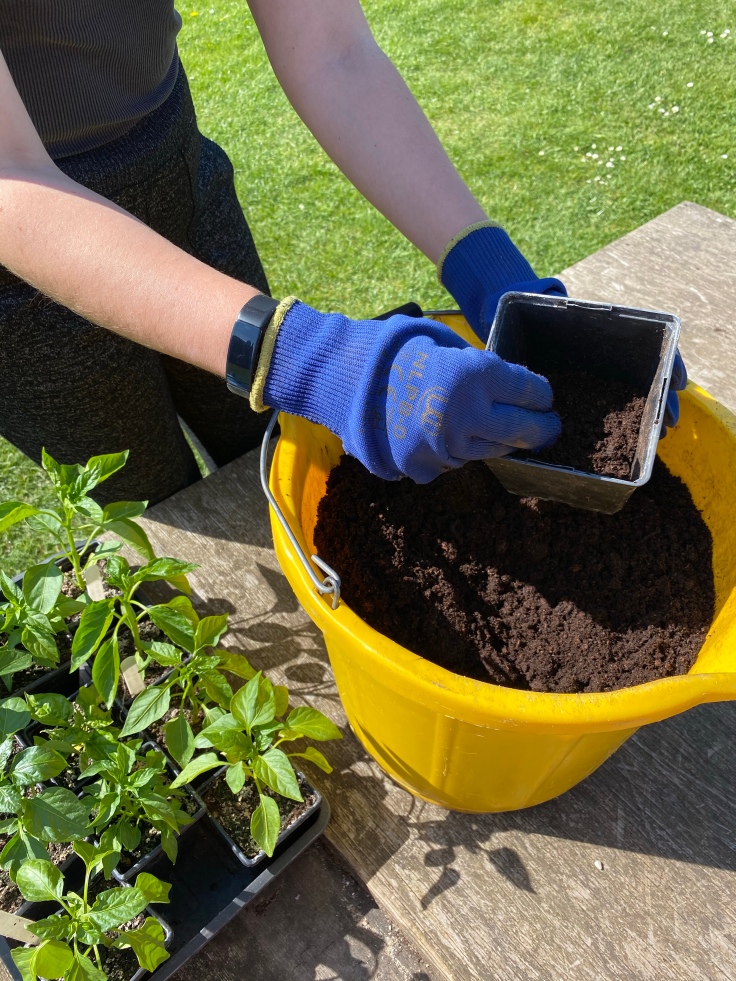 When you’re growing different varieties, it’s also key to make sure you label your plants as you’re going along. Otherwise, by the end of this potting up exercise, I can guarantee that I wouldn’t be able to distinguish the 11 pepper plants from one another!

We’ve found that an excellent way to do this is with Pentel chalk board markers. We fin that they work on both black and terracotta coloured plastic pots, which is what we mostly have, and it washes off easily with a bit of soapy water once you’re finished!

Once the pots are prepped, we potted up each pepper one by one – making sure to match the pepper to the correctly labelled pot!!

If you hold the pepper plant’s stem between your second and third fingers and carefully upturn the pot and give it a gentle squeeze, the plant should come out easily into your hand.

We then placed the plant in the centre of its new pot, and carefully trickled some more multipurpose compost around each side and some over the top. Then each plant was gently firmed in.

Once all the peppers had been potted up, we gave them all a light water and these have gone back into the cold greenhouse to grow on until they are ready to be planted outside in a couple of weeks once the risk of frosts has (hopefully!) passed.

You may be able to see that I watered over the top of the plants from this photo – mainly because the droplets of water on the plants look nice for the photo! However, you should be careful if you are doing the same to avoid scorching the leaves. Therefore, once we had watered the peppers, we left them outside in the slight breeze until their leaves had dried off. Otherwise, you can sometimes find, especially in greenhouses, as the sunlight reflects off the glass, that you an inadvertently scorch the leaves of plants. Although on the whole, plants tend to recover from the scorching (depending on the extent of it), it definitely knocks them back, so worth trying to avoid if possible.

If you are potting up and the weather isn’t nice enough to leave the plants outside to dry off like this, we recommend carefully watering round the base of the plants with your watering can, and keeping the leaves as dry as possible.

2 thoughts on “Potting up our peppers”