We grew a few different types of peppers and chillies last year. Some of them we really liked, and others we were pleased we’d tried, but wouldn’t be in a massive hurry to try again. But that’s just how it goes, we live and learn, and that’s all part of the fun!

One thing we did decide was that we needed to sow them earlier. Last year we started them off in the first week of February, but we found they only really got going quite late in the season, and we wanted to be able to enjoy them earlier. Therefore, this year, we vowed to sow the seeds a few weeks earlier. And here we are…

First up is the variety that we are dying to try again: Snackbite. This one is a really tasty small sweet orange pepper when ripe, the ones you get in little punnets in the supermarket, but they’re usually more expensive than your regular bell peppers. Well it turns out you can grow your own, and relatively easily!! You don’t even need loads of space. Last year we grew ours absolutely fine in a 30 litre pot (which is about 30cm diameter to give you an idea). You just need to be patient, and prepared to give them a little TLC!

Next up, we’ve got a few new varieties to try. We’re not sure how many of these we’ll grow on to maturity (it depends how much space we have with everything else we want to try!) but we’re also not just growing them for ourselves. We’ve mentioned in previous blog posts that we’re members of the National Vegetable Society (NVS).

The NVS encourages like minded people to share their experiences of growing veg via local district association meetings, an online forum and increasingly, social media. We’ve been members of the NVS for a number of years and regularly attend Essex District Association events which are held throughout the year. One of these is a plant sale at our local Royal Horticultural Society (RHS) garden, Hyde Hall in April. We have supported this event along with a number of our other members for the past couple of years as a way to promote the NVS and veg growing more widely. If you’re interested in learning more about the NVS, their website can be found here: The National Vegetable Society website.

Therefore, some of these seeds we hope to be able to take to the plant sale in April, as peppers and chillies are often popular with visitors.

The seeds we’re sowing were kindly donated by a gardening friend we have, as well as a relatively local seed company to us, King’s Seeds, who gave us some catalogues and free packets of seeds to giveaway at another event we supported last year to promote the NVS. 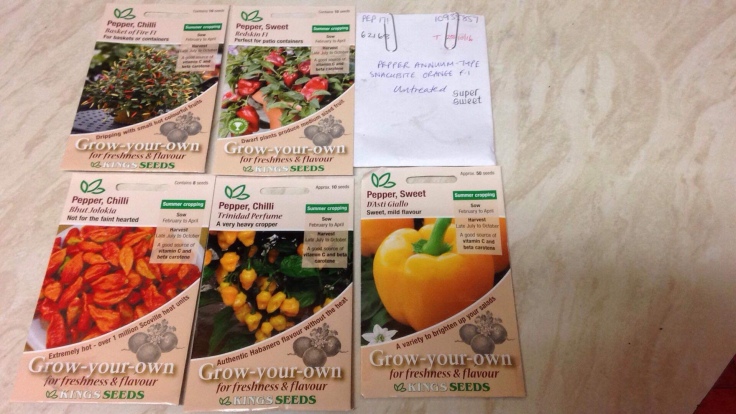 As with the vast majority of our seeds, these were sown in 1/4 seed trays in a fine Seed and Modular compost which was slightly dampened and then firmed down gently before sowing the seeds on the top.

As we’ve said before I’m sure, we like to space our seeds out carefully in the seed trays when sowing where possible rather than just scattering the seeds over the surface willy nilly. This helps you out loads when you come to prick the little seedlings out as they’re less likely to be entangled, and so are their roots!

Afterwards, the seeds are very gently pressed slightly into the surface of the compost before covering with vermiculite. The seed trays were then placed in the propagator with a sheet of glass and a piece of newspaper over the top to exclude light until they have germinated. Whilst on the propagator, they should be checked regularly as the seed trays are only small and can easily dry out. If this happens, you can moisten the compost again with a fine nozzle pump sprayer. No huge jets of water, or you’ll wash your seeds out of the compost! 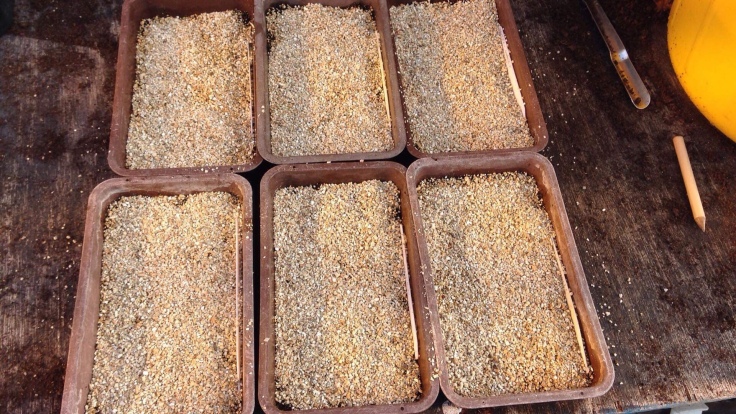