This time last year, we made a plan for the growing season ahead. So we thought it would be a good time to look back at that plan and see how we got on!

We’d set ourselves the goal of three sowings of potatoes for 2019, to harvest in May, July and December. Well we managed 2/3, so not horrendous. No new potatoes for Christmas though unfortunately. The other two sowings didn’t do too badly though.

The main crop sowing that we did in April and harvested in July was definitely the most successful, but I guess that was to be expected, as they were grown at the time potatoes should be! The only thing was that the pots we planted them in were too tall and narrow, which hindered tuber production (and harvest!!) It was also hard as the weather got warmer to get enough water into the pots. Even twice a day wasn’t enough at one point, as they needed so much water to swell the potato tubers. 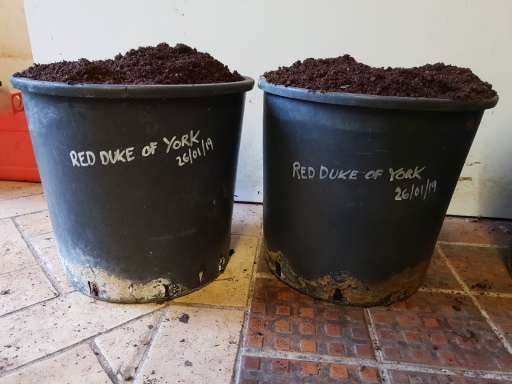 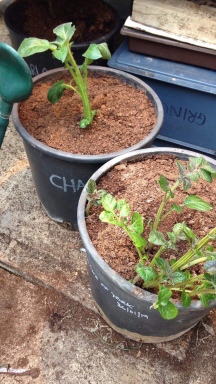 The early sowing in February and harvested in May weren’t bad though; they just took longer as they were started off in older weather. The cold greenhouse to protect them from the frost was definitely a winner though as it meant we could eat homegrown new potatoes in May!

Fingers crossed for some Christmas dinner new potatoes for 2020!

So we were drawn to this as it was so colourful. And we can confirm that it didn’t disappoint! It was also “sow simple” to grow. The seeds were sowed in cell trays, plants planted straight out in the garden from there, and that’s where they stayed to maturity.

If anything, the chard was moe prolific than we expected and we couldn’t keep up with it. One to note for another time! 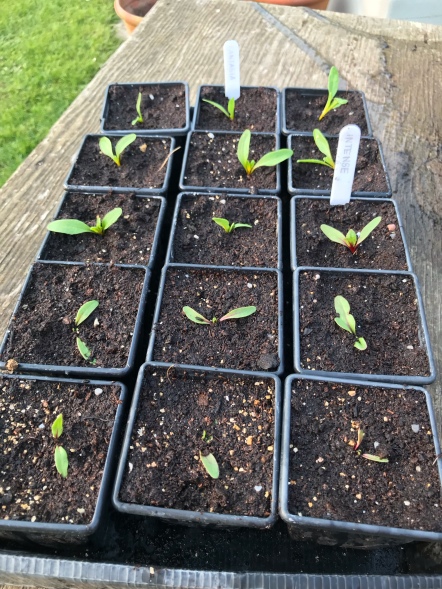 We managed to grow this one too, although the harvest was perhaps not as successful as the chard. We think this is because we had a dry spell during the period that the corns were forming, so they didn’t bulk up as much as they could’ve done and some hadn‘t fully formed when we harvested them. They pollinated well though, so the square formation we planted them out in must’ve helped us out there! 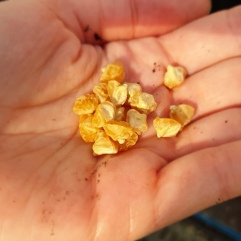 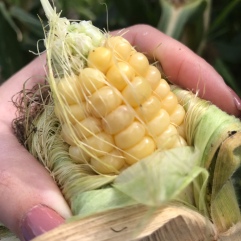 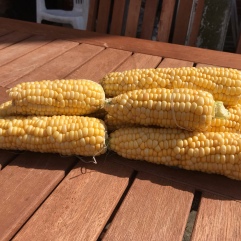 These are one we tried for the first (and perhaps last!) time. They were relatively simple to grow, but we weren’t massive fans of the taste. We may have let them go over the top though, as they went from zero to massive in what felt like a matter of days! We’ve heard that they are nice grated raw and eaten in a salad, so perhaps we‘ll try that if we grow them again.

These on the other hand were delicious, definitely one to grow again in 2020 if we get round to it! Both the Romanesco cauliflowers and purple cauliflowers were just gorgeous to look at too! 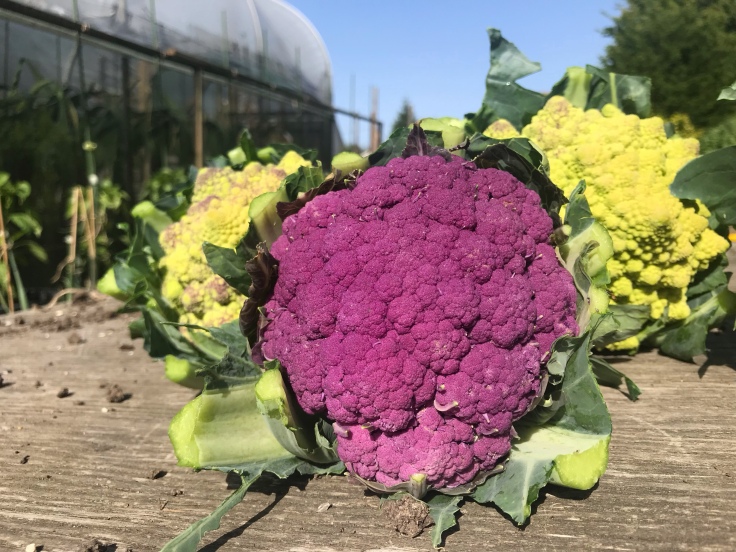 They grew exactly the same as their white counterparts, but didn’t need shielding from the light to preserve their colour! The Romanesco came out top in the taste test vs the purple ones, but we think that may have had something to do with how they looked when cooked. The purple cauliflowers went that odd blue-grey colour that red cabbage gets when boiled. The best use we found for the purple cauliflower was cauliflower rice and stir fry, as it kept most of its coloured unlike when it was steamed. The Romanescos on the other hand kept their fantastic colour perfectly even when cooked!

So we forgot all about these…woops!

And these we grew, but with varying results to what we expected. It turns out that both the Padron and Machu Picchu varieties we were drawn to typically grow much hotter than advertised. A single Machu Picchu turned some otherwise delicious homemade tomato soup into a soup that needed to be diluted three times with water and milk and was still too hot to eat in anything other than tiny doses!

And the Padrons were the same. Eating these could only be described as tapas roulette! We have one harvest that was completely mild, and several other harvests which made for a rather unpleasant tapas experience! 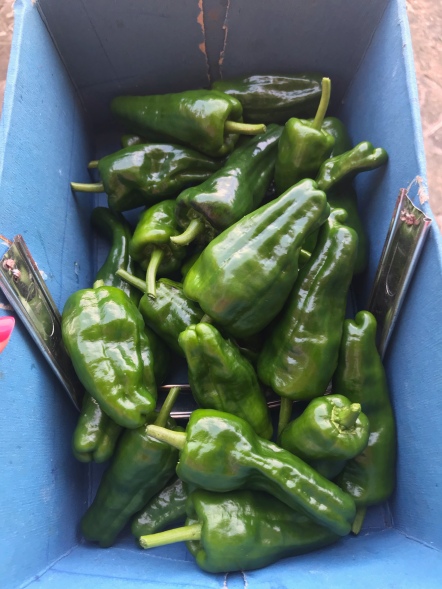 Having read up on Padrons, it turns out that is totally normal. Apparently the Padrons they grow for the supermarkets are picked by skilled workers who learn a hot padron from a mild one, hence why almost all of the Padrons you buy in a punnet in the supermarket are mild!

But we live and learn! The Gogorez and Snack Bite sweet peppers we grew both turned out extremely well. Our learning is to try and sow them a bit earlier in 2020, as they are notoriously slow to grow, and otherwise you don’t get to harvest anything until most other crops have finished! 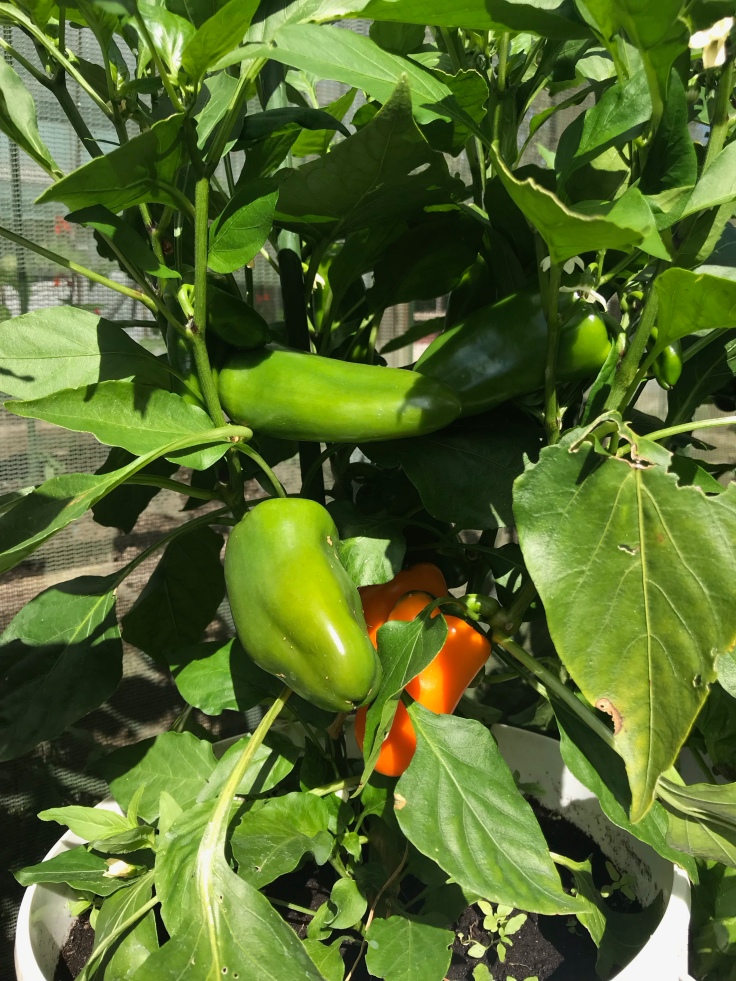 Again, not the most successful of our 2019 growing attempts unfortunately. We think this is because we planted it a bit late (even for spring grown garlic) and tried to grow it in a pot with compost that was too rich. Alliums (the onion and garlic family) are known for liking quite poor soils. So place your bets on what we’re trying in 2020! 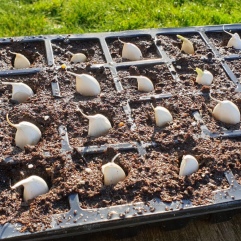 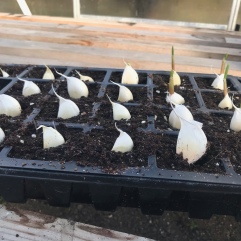 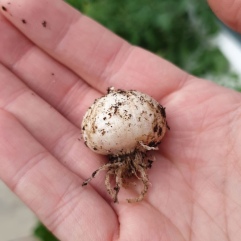 Overall, these all grew well. We enjoyed numerous harvests of carrots, lettuce, cucumbers and courgettes. The radishes and spring onions are harder, as they peak much faster and so need to be eaten relatively promptly once ready for harvest. The key to success with these therefore has to be to sow little but often, to give yourself a succession of both crops through the summer months. 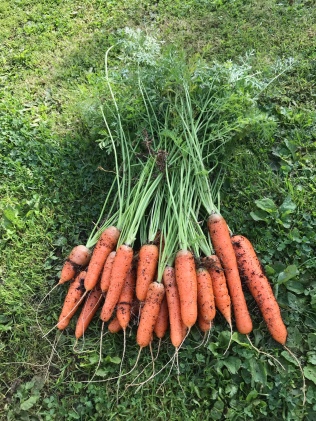 We’re hoping for better things from the strawberries this year. Don’t get us wrong, we got some strawberries, but not as many as we would’ve liked. This was for two reasons:

2. The weed suppressant that was suppose to be a godsend was a total hindrance. It may suppress weeds well, but it is also pretty impermeable, so getting water to the plants was much harder than it needed to be, resulting in the plants having to survive on less water than they (and us!) would’ve liked!! 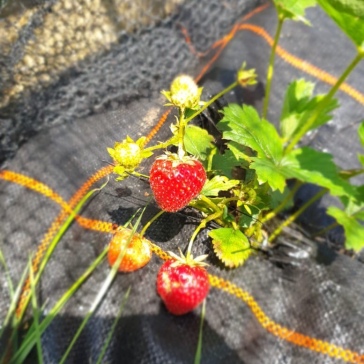 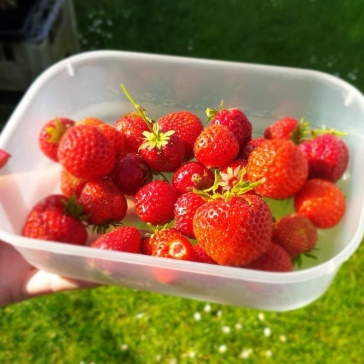 And that’s a wrap for 2019. Not bad if we do say so ourselves… And some learnings for future years made along the way, which is great!

We’re looking forward to sharing our gardening experiences with you again in 2020! Watch out for this year’s plan over the coming weeks!